Together Again: Tools vs. Barking: Onyx On The Loose 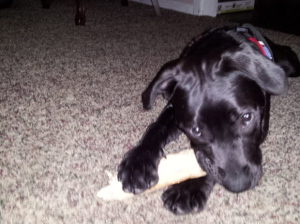 Barking, nagging…that’s what I had to deal with first thing this morning. By 8:30 a.m. the boys and I, Onyx and Happy, were already making our second potty trip of the day. But there was something quite disturbing going on for them. A roofing crew was scraping away the old shingles from my neighbor’s house to put on a new roof. I watched the workers and thoughts of that roof being put on by the previous owner around 10 years ago made me lose track of the dogs’ activity. Remembering only then that Onyx doesn’t like the sound of loud vehicles, firecrackers, guns or anything else, I called out for him.

I looked down and Happy was there beside me, but Onyx was nowhere within sight or hearing. He really has a fear of loud noises and all of the activity next door was too much for him. He had run off. I drove around calling out for him and didn’t see see him. I called his new walker for help. He and I drove the route that they walk each day…no Onyx. I came on back, went online to the PetLink website and posted a Lost Pet notice for him, reassured that he and Happy both have the microchip.

Next, my sister came to see how she could help, so I decided to leave again and, this time, leave the garage door open in the event that Onyx might come back while I was gone. Before, when he has heard disturbing noises, he has run back into the garage and pounced on the door. Around 11:50 I decided to drive the walker’s route again and, over on the other side of the neighborhood, there was Onyx, following a young man who resembled his walker right down to the hooded jacket. I called out to him. The Lord knows, I was SO HAPPY to see my boy! As I was getting Onyx into the car, Happy decided to jump out and investigate the young man. Lol!

I canceled the Lost Pet notice on PetLink and reminded myself that I will eventually manage to correct Onyx’ bad behaviors and that he was really trying to say, ‘Mom, that NOISE was just TOO MUCH for me…’. He’s so happy to be home. He doesn’t want to go outside at all, for pottying or fun, but soon he will see that the noisy workers are now gone for good.