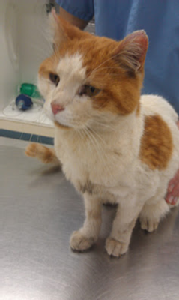 I just wanted to tell you how happy I am with the PetLink service. Without it, there’s no way I would have ever seen my cat Moses again.

I rescued Moses as a kitten. He was abandoned in a parking lot at about 3 months. I work as a veterinary technician, so he was always well taken care of. That being said, I didn’t immediately microchip him. Since he was to be indoors only, I didn’t see the urgency. I had him chipped on a whim at 1 year, since he was already getting vaccinated. He lived a happy life indoors, frequently hanging out with my parents’ 3 dogs.

In December 2011, I went out of town, and came back on the 18th in the middle of the night. I didn’t see Moses around, but figured he must be asleep somewhere in the house. The next morning, he wouldn’t come to his food bowl, which was very unlike him. After scouring the house looking for him, it occurred to me that he may have gotten outside. This seemed unlikely, as he has never left the front porch. After searching for hours, I had to go to work. The next day, I put up signs at every stop sign and major intersection in about a 1/2 mile radius of my house. I called every veterinary clinic for miles. I also immediately went to PetLink’s website and reported him missing. Days of searching went by, along with several trips to animal control – just in case.

A week went by with nothing. I replaced all my signs with laminated ones to outlast frequent rain. Occasionally, I would get calls about my missing cat, but there were never any solid leads. Weeks went by, Christmas and New Years passed, and knowing what I do about the dangers stray animals face, I became discouraged. After a month had passed, my greatest hope was that maybe someone took him in and had decided to keep him, since the chances of him surviving on his own that long were so slim. It was not until February 1st, a month and a half later, that I received an email from PetLink stating that Moses had been found. At first, I didn’t quite believe it. It gave me the information for Cobb County Animal Control, and I immediately gave them a call. I told them that PetLink notified me of my cat being found, and the woman on the phone knew him by name. I rushed to pick him up.

Talking with the Animal Control officer on the phone while on the way, I learned that he was not in good shape. Apparently, he had been out in the wild fending for himself. He was picked up about 5 miles from my house, across a major highway. When I finally arrived at the Animal Control shelter, I finally saw him. If I didn’t know it was him, I wouldn’t have believed it. So weak he could barely move, and all his bones prominently protruding, there was Moses. Usually 12-13 pounds, he weighed in at 6.0 even. He was so filthy that you could hardly tell he had a primarily white coat. Still, aside from being emaciated and filthy, he was alive.

I rushed him to the emergency clinic, where they immediately started treating him. He quickly began showing his old personality. He steadily improved overnight, and I was surprised when the doctor told me that he thought it would be best for Moses to come home with me to recover at home. So after a day of hospitalization, I took Moses back home. He’s been home two days now, and he couldn’t be doing better.