Together Again: An End of Summer Escape 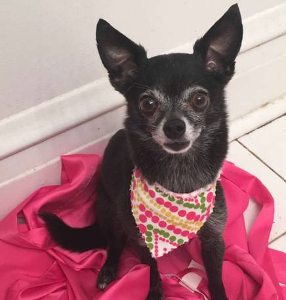 As I was grilling on my deck, my 3lb Chihuahua, Bella, was enjoying the last leg of summer by running and playing in my fenced in back yard. After a bit I realized she hadn’t come up in a while, which means she inevitably crawled under the fence again to go explore the neighborhood, like she sometimes does. I walked down the block looking for her, as she is pretty good at staying within the same path we walk every day. There was no sign of her so I kept looking, and waiting for her to come back.

An hour passed and now I am in full on panic mode but keeping it together trying to remain calm and positive. I alerted PetLink that she had been “missing” for an hour. Rolling into hour 2 of her missing, I was still walking around the neighborhood, yelling her name. I then got my bike and cycled around the neighborhood. Mind you we live in a busy neighborhood of Chicago, so I am hoping for the best but preparing for the worse.

At this point I am exhausted, mentally and physically. So I lay on my bed to call my mom and told her the bad news that Bella is missing. As I am trying to explain to my mom what happened, I got a text on my phone from PetLink with four critical words – “Bella has be found!”

I called the phone number provided and the extremely helpful operator connected me to a Chicago Firefighter who had Bella! It turns out the little Diva went for a joy walk to a carnival 7 blocks from my apartment. Two women were able to catch her and take her to the nearest firehouse where the individual who had her noticed her PetLink collar tag – which I had just put back on her an hour before she went missing! He called PetLink and I was able to be reunited with Bella after only 3 fearful hours! In a city as large and heavily traffic populated as Chicago, this never would have happened if it wasn’t for PetLink!

I am forever thankful to all the kind individuals who found little Bella, and for PetLink for providing such a great service for people to be reunited with their loved pets! Get Up and Go! Why Walking Your Dog is so Beneficial for You (and Them!)

It’s Walk the Dog Month! You might be thinking, “hang on, why would we have walk your dog month during one of the coldest months of the year?” While it might seem strange, it’s the perfect time to find extra inspiration to get out of the house and take your dog for an adventure in…

Lauren Piandes 1 month ago 4 weeks ago

We can’t believe the holidays are finally here! While preparing for your various celebrations, it’s important to remember that colorful lights and decorations, various baked goods, and colder weather could potentially cause your pet harm. Here are a few ways to pet-proof your holiday:   Don’t Share Your Holiday Feast This is one of the…

The holidays are right around the corner and some of us may be preparing to travel to see relatives and friends this season. You may be planning to bring your furry pal with you, and that’s where PetLink comes in to help! Here are some tips on how to prepare your pet for holiday travel:…