Together Again: Dog For A Rainy Day 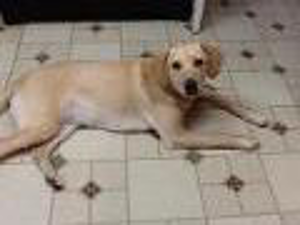 Charlotte, now our Lab, first came to my attention after she had been seen by several neighbors running free, usually after a thunderstorm, starting in spring. I found her myself on a Tuesday during one of these downpours. I put her on a leash and started contacting the neighbors who had seen her before. No one seemed to know how to get in touch with the dog’s owner. Apparently, the guy knew where Charlotte tended to run to, because he pulled up shortly after I began my door-to-door search. He said he was sick of the damn dog running away and that she was going back to the shelter … unless I wanted her.

I could not say yes without consulting my family so he loaded her up and off they went. I returned home and couldn’t stop thinking about the dog’s sweet face. My husband said that, if I could find her, then we would see if we could keep her. Not knowing the owner’s name, only what kind of car he drove, I started cruising the neighborhood the next morning. No luck. I went to the shelter. Again, no luck. One more cruise around the neighborhood. Yet gain, no luck. My husband said that if it was meant to be then we would find her.

At 4:30 a.m., I awoke to thunder and said a quick prayer that Charlotte was safe. Little did I know that she was in my front yard!! A neighbor who knew the whole saga so far had spotted her and so she put the loose dog inside our fenced back yard. What a joyous surprise to wake to! I noticed a number etched on the back of an old rabies tag so I entered it and saw that her descriptive information was logged with PetLink. We had never just assumed that we could keep Charlotte and PetLink helped us go through the proper channels to find out her name and who owned her, PetLink said they would contact the people who were currently registered as owners. After two weeks, Charlotte was still with us and quickly winning everyone over, including the eight-year-old English Shepherd we already had, but we had not heard anything from her official owners. We waited another two weeks with no contact, just to be sure, but inside we knew she was ours. She is now a happy part of our family, fetching, digging, and wrestling with her ‘big sister’, Lucy.