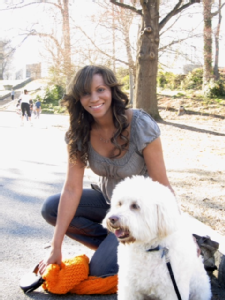 I am getting married this spring and was shopping for wedding dresses with my mom. I had let my Cockapoo, Snoopy Boy, out and let him back in before I left. We also knew a plumber was coming to check a leak at my property. While I was out, I received a phone call from my fiancé, Max, saying, “I don’t want to alarm you, but I can’t find Snoopy Boy. I let him out 40 minutes ago but I can’t see him.”

We have a fenced-in property but we saw that the service guy had left the gate open. Snoopy Boy doesn’t run away usually, even when the gate is open he’s always here and never tries to leave. However, we do live opposite the beautiful Piedmont Park in Atlanta and Max had begun a new regime of walking Snoopy Boy there every day. It’s quite a regimented schedule but that day it was five hours past the time Snoopy Boy and Max would normally hit the park. We figure Snoopy must have said, “Maybe I should walk myself” and made an executive decision to head out. We were horrified that it could happen so easily and now we’re super wary.

Max called some neighbors to see if they had news and then went looking in Piedmont Park which is very large, like Central Park in New York, and landscaped by the same family, the Olmsteds. I was terrified at the thought of the busy street Snoopy Boy had probably crossed alone – I thought he would be found on the side of the road having been hit by a car. After this sickening image, I was relieved I didn’t see him in any injured state.

My mom and I were still in the bridal store so she called her home and my dad said they had received a call from PetLink. I co-adopted Snoopy Boy with my father so he could stay with my parents while I worked. It transpired that a kind woman in the park wanted to ensure Snoopy Boy didn’t get hurt, so she called and left a message to say she would be happy to drop him off. But my folks weren’t there so she used the data on his collar tag to contact PetLink and took him to the local county shelter. Then I got a call from PetLink telling me he was there and it was very close to where we live. We bailed him out of doggy jail and he was a mess, he smelled awful.

I was so relieved and so happy. I didn’t know what I would do if I lost him. We had another little Cockapoo called Snoopy Girl for a long time and we had only just got over her death. We were reunited and he was fine. I am so thankful that a kind stranger cared enough to contact PetLink and turn him into a safe place.