Together Again: Farm Cat Lost In The City 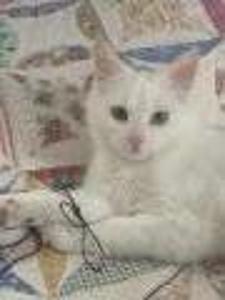 I adopted my cat, Snowy, from my sister who lives outside a small town. Growing up, Snowy lived among a clan of about fifteen cats who took care of him after his mother abandoned him. My sister feeds and waters these cats daily, but they are pretty much on their own. Snowy was befriended by my sister’s grand-children when he was about two months old. When I visited a month later, she was worried about him surviving the terrible cold we would have that winter, and, indeed, it turned out to be a very cold winter.

So, I adopted Snowy and took him to live with me in a large city in the Midwest. He stayed inside and did not want to go out because of the cold weather. At the beginning of March I got Snowy neutered and microchipped. Little did I know that two weeks later, on March 15th, I would have to put that chip to use!

That day in March, the weather was fine, so I took Snowy out on the porch. He got scared and bolted. He probably thought I was taking him to the vet again. I looked for him and called for him but he was scared and I could not find him. I put out advertisements and told people in the area he was missing. I even spoke to my letter carrier and asked him to look out for Snowy.

I contacted the Humane Society constantly and my vet sent out emails with Snowy’s picture and had people looking for him. I was worried, as Snowy had always had the protection of his clan before. Where he grew up there are very few raccoons and possums. But in the city where I live there are many!

Finally, after seven weeks of searching, most people had given up hope that I would ever see Snowy again. I did not give up hope because I knew he had the PetLink microchip. Then, finally, on May 8th, I got a call from a nearby vet clinic. Someone had brought Snowy in! I don’t think I have moved that fast in years! It turned out that he had been living under some bushes and it took the lady who spotted him forever to catch him. I think she must have fed him because he is healthy. He is so glad to be home and now I have my kitten back.