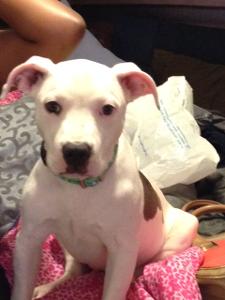 While my boyfriend and I were moving from California to North Carolina, we had a family member watching our Pit Bull, Skyy, while we got our new house ready for her. A few weeks after we left, we received a phone call from someone stating they had found Skyy’s collar and tags, with my cell number attached, but had not spotted her in the area at all. Our first immediate reaction was confusion and shock. After speaking with the family relative who was supposed to be keeping an eye on her, the truth was revealed – that the relative dropped off our dog in that area in hopes that animal control would pick her up – sad right?

Needless to say, we were very upset and hurt, thinking we would never see our sweet baby again. I was frantic for about two weeks, doing everything I could to try to notify police stations, shelters, animal hospitals, websites such as Craigslist and of course reporting her lost with PetLink. All the time I hoped someone would spot Skyy, or bring her in somewhere to report her found, since I could not physically be there to put up flyers.

With almost a month passing, I was convinced someone had come across this beautiful and sweet puppy, taken her tags off and kept her for themselves. All we had at this point was our faith and prayers that she would be returned to us. Then, my boyfriend received a call about a month and a half later from an animal shelter back in California reporting that someone had brought Skyy in.

Skyy had been living with a homeless girl who was befriended by someone who noticed her dog was too well taken care of to be living on the streets and that the dog must have had a worried family looking for her. The kind person was contacting different places trying to find out if anyone knew of a lost dog in our small California town. After she was unable to locate Skyy’s owners, she hoped the animal shelter would have some more information. The shelter was already alerted that our dog was missing, had recent identifying pictures we had sent and was also aware that Skyy was microchipped. They scanned her microchip and connected her details with our report of a lost pet.

The family who rescued Skyy from the streets was able to take care of her for one more week while we arranged her flight from California to North Carolina. At last we were reunited with the final member of our family by the grace of God and PetLink’s microchip technology! 🙂