Together Again: His microchip reunited us 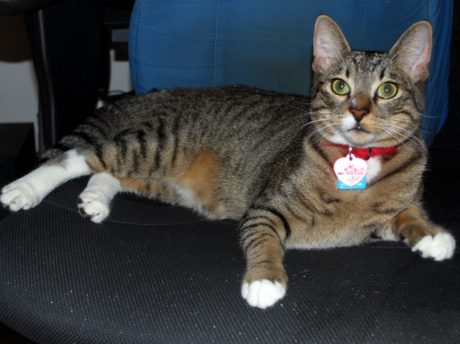 This is a bit of a soap opera. I travel the country by motorhome and my ex-husband lived in a house and he has cats, so I asked if he would care for my cat Newman for me. He adopted Newman, he cared for him for many years, he really loved him. A few months ago I found out that my ex-husband has dementia and the state put him in a home. My ex’s sister called me and I asked about Newman. She said oh, Newman died, don’t worry. I was sad to hear that, but the cat was 15 years old and had a good life.  What makes my stomach turn a little bit is that she claims that he died in her arms two months before my ex went into the nursing home.

I was able to reach animal control and I gave them his PetLink microchip number. They confirmed that they had my cat! He was very much alive and even healthy at the age of 15.

The cat was in West Palm Beach Florida and I am in California, but animal control agreed to transfer Newman to my very dear friend in Florida. She adopted him today while I was on the phone listening.

I feel fairly certain that if animal control got a random phone call from a woman in another state without the microchip number, they would not have taken me seriously.

I am the administrator for a Facebook group for lost and found Cavalier King Charles Spaniels. Even though this is a story about a cat, I am going to share Newman’s PetLink microchip number in the group. As we experience warmer weather, we’re ready and willing to fling our windows get out in the yard, hang out on the porch, etc. But open doors and windows leave the perfect escape route for our pets! Here are some ways that we can prevent our pets from exploring on their own: Check the screens…