Together Again: Peppermint Keeps Her Cool 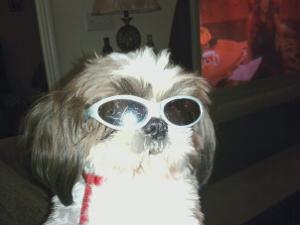 On Memorial Day 2011, I had let my Shih Tzu, Peppermint, out for her potty run in the backyard. I let her out the same as I did every afternoon. I would open the door, she would go out, I would grab a magazine to come sit on the steps and watch her do her thing and then run around the yard for another thirty minutes.
This time, after five minutes, I grabbed the magazine, I opened the door to come out and I noticed that Peppermint wasn’t in the yard. I called for her and she didn’t come to where I was. I went around the front of the house to see if she was up there, but there was no sign of her. If my neighbor’s dog was in the storm door, she would go over there to greet him but she wasn’t there either. I began to call out for her and still no answer. I walked down our short street and called for her, but still no answer. I then ran down the street, on the other side of my house, calling her name and no answer came. I began asking people that were outside preparing for the holiday festivities if they had seen her but no one had.

I began to panic. I figured there was no way that Peppermint could have run off that quickly without anyone seeing her. I sprinted back home to get in my car to search the entire neighborhood. I got some of my neighbors involved to actively look for her. Everyone knew who she was because I walked her every weekend around the neighborhood. After searching for four hours, I went to the local animal shelter and they hadn’t had a report yet of a lost dog. I went back home to email my husband, who at the time was out to sea for a week. He told me to print flyers and pass them out which I did. Peppermint is microchipped and registered with PetLink and I knew they would alert me if her microchip was scanned. I went on the website immediately and reported her lost. I felt that Peppermint would be reunited with me if she was turned into a shelter.

Fast forward two years to April 2013 when we got orders posting us to Manama, Bahrain. As we were packing up to leave the United States, I ran across Peppermint’s paperwork. It had been two years since she was missing and we had given up hope even throwing her toys away. We were ready to move on in hopes of maybe getting another dog. Fast forward another year to April 2014. I got an email from PetLink with the subject line “Peppermint Williams Has Been Found.” I gasped when I read it and my husband asked me what was wrong. I told him that Peppermint had been found. His eyes grew large and he looked shocked saying, “No way she’s been found – it’s been three years!!” I then opened the email in full and read it to him. We both were in a state of shock. I called PetLink immediately and asked if this was true. The operator assured me that, indeed, our dog had been found and then connected us with the animal shelter where Peppermint was being held. Once I got into contact with the shelter, I told them our story and they were all so eager to help. Since we are in the Middle East, it was difficult to just drive over to pick her up! Their representative was so helpful in making sure Peppermint had her health certificate and shots done before we hired a pet carrier service to come and get her and ship her to Houston, TX to stay with my husband’s mom until we leave the Middle East. We leave in less than a year and dogs can’t travel on airplanes to the Middle East for most of the year due to hot humid weather, so this was the right choice. We will be reuniting with Peppermint at the end of the summer. We are counting down the days till we hold her again. The microchip is a life saver, it was the smartest identification device to get for a pet.