Together Again: Frosty Fears For Frenchies 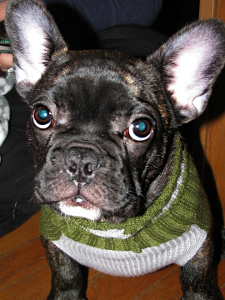 We thought we had lost our two Frenchies forever. Our French Bulldogs, Daisy Mae and Wilbur Jabba Beast, were let out to potty and escaped. It was just about freezing weather and their breed is absolutely weather sensitive so we feared the worst had happened. We imagined that they had wandered out into the road and been hit, or wandered into the woods and been attacked by a wild animal – coyotes and bears are bad around here – or we thought someone had seen them and taken them from us.

When the dogs got loose it was on the one rare occasion when we didn’t have their collars on them as they had just had a fresh bath. So, we were prepared, but absolutely heartbroken, for what the worst thing that could’ve happened might be. We searched and searched and drove around all night but there was no sign of them anywhere. Then, the next morning after a night of absolutely NO sleep or rest, we got a call from a nearby vet telling us that a Good Samaritan had seen Daisy and Wilbur sniffing around on the side of the road.

This person was a fellow Frenchie owner who knew that their breed would not fare well in the cold, rainy, winter weather. He picked them up and cared for them overnight, after going to every house in the area asking if anyone had lost two dogs (we were out searching and weren’t in our house at the time). First thing the next morning the Good Samaritan took Daisy and Wilbur to his own vet and got them checked to see if they were microchipped, which they were through PetLink!

We got the call saying they were found, safe and sound, within five minutes of their having arrived in the vet’s office and, man, did we zoom over there to get them! We were so relieved and couldn’t stop crying. I thought I had lost the two of them forever! PetLink brought me my little nuggets, Daisy and Wilbur, back and I’m forever grateful to you and my vet who recommended the PetLink microchip. THANK YOU, THANK YOU, THANK YOU!!