Together Again: Gosh! You’ve Got Gus? 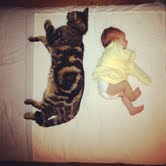 The Animal Adoption and Rescue Foundation is a small animal rescue organization, based in a house in an old neighborhood, now filled with a few residences and lots of small businesses. There are stray cats in the neighborhood and we have always fed them and, at some point, trapped them for spaying or neutering and to administer vaccines. If they are friendly, we keep them inside and find homes for them, if not, we put them back out into the neighborhood and care for them.

We had been feeding a cat for several weeks that turned into months. I had never seen him in the daylight, but one of my volunteers had seen him. A couple of times he was out when she left the building and he was vocal, but wouldn’t come to her. On Thursday evenings local vets volunteer their time and we do routine vet care for our foster animals. About a month ago, this cat came out on a Thursday evening and one of my volunteers was able to pick him up and bring him inside. We put him in a kennel and decided to let him ‘settle’ for a few days. He was friendly, but a bit disconcerted with all the changes and commotion going on around him.

Another volunteer thought to get the scanner and we discovered that he had a microchip – PetLink, of course! It was about 8:30 in the evening and I called the PetLink number. I was put in touch with the registered owner, Jessica, and given the cat’s name. I called and left a message about the cat whose name, I discovered, was ‘Gus’. Jessica called me that evening on my way home. She picked Gus up the next day and it was a happy reunion. He had been missing for 4 months and a day. The family moved here from Reno, Nevada, and Gus disappeared within about three weeks of their move.

Jessica said that Gus ‘just wouldn’t’ stay inside. If they tried to keep him in he would yowl, sometimes pee on things, and insist on going out. I called her about two weeks after they were reunited, and she said Gus followed her around for days after his return. She told me he had not once acted like he wanted to go outside and they were hoping he wouldn’t. We at the AARF were so happy to see Gus back with his family and so grateful he was chipped with a PetLink microchip! We are microchipping all of our dogs now and hope to do the cats in the future. Thank you for making it affordable and easy for shelters and rescue organizations.

Jessica was eight months pregnant when she was reunited with Gus and the picture shows Gus and her daughter, Fern, born exactly one month after Gus came home.