Together Again: I Found My Lost Cat – A Suggestion For Others To Try 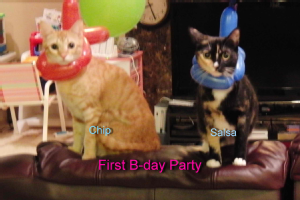 If you have two cats, and one gets out and is lost, I have a great suggestion for you on a great way to find your lost pet … as it worked for me. I came up with this idea on my own. I am taking the time to post this just in case it may help someone else find their missing family member!! I am hoping someone out there will also have success with this technique.

I am a single dad raising my six-year-old daughter alone. Last year, I bought my daughter two eight-week-old kittens from the same litter. Since they are brother and sister we named them “Chip” and “Salsa.” Over the year, my daughter has become extremely attached to “her” kitties. Neither cat had ever been outdoors so, when, one summer night, Salsa ran out the front door, I became very worried.

I spent three hours that night looking for her. Unfortunately, the next morning I had to fly to Chicago for a five-day business trip – the worst timing! At least my daughter was staying with her mom for two weeks, so she didn’t know about any of this. While in Chicago, I reviewed the PetLink help section over and over to get ideas on how to find Salsa. I was crushed by the thought of my daughter returning home, only to learn that one her kitties was gone.

After returning from my trip, I went to work doing everything I had read about – making a poster, checking local animal rescue centers, posting my ‘lost cat’ page on PetLink. I went to local vets and gave them posters of my lost cat with my contact info. I gave the same poster to several neighbors as PetLink had suggested.

My first night back, I walked the neighborhood calling Salsa’s name and shaking a container filled with her favorite, tempting snacks. The next night, I put Salsa’s brother Chip in his kitty carrier, put the carrier – with Chip in it – on my daughter’s old stroller, and pushed the stroller all over the neighborhood. Since Chip didn’t like being in the carrier nor being outside, he would occasionally meow. I had hoped that Salsa would hear her brother’s voice and come to us.

I did this for three nights without any luck! I realized that part of the problem was that Chip didn’t meow very loud or for very long when we were out looking for his sister. Also, as my neighborhood has tons of bushes, Salsa had unlimited places to hide. The next day, I took Chip to see a local vet to look at his microchip. It was this trip to the vet that gave me the idea which led to my finding Salsa.

While we were driving, Chip was not very happy being in the car and he kept meowing really loud. Then the idea hit me. I drove home and got my digital recorder. Next, Chip and I went for another drive. I turned on the recorder and put it next to his car carrier and we drove for about twenty minutes. Then, when I got home, I edited the recording of Chip meowing in my computer, looped it several times and transferred it to my iPod.

The next two nights, I walked my neighborhood with an iPod boom box blasting the sound of Chip meowing for three minutes and then I would turn it off, stop and just listen for one minute. The neighbors must have thought I was crazy! I soon realized that looking for my cat during the early evening wasn’t working well because there was so much going on in the neighborhood during that time, with cars coming and going and people walking around. So, the next night, I waited till midnight to go on my boom box cat search.

At 2 a.m., while walking at the opposite end of my neighborhood, I heard a rustling in the bushes. I stood very still and called for Salsa. I almost screamed for joy when, sure enough, Salsa ran out of the bushes and came to me! My heart stopped – she had been gone for twelve days, she looked awful and had lost about 70% of her body mass. But I was so relieved. When we got home, her brother Chip hissed at her and ran. I gave Salsa a bath, lots of food and both cats are now reconciled and doing great.

Here are my tips:

1) When looking for your cat do it for a couple of hours between 12 midnight and 6 a.m. since it is usually the quietest time of the day and car or other noises really scare cats. Sure, I was tired at work that day but the end result was worth it!

2) If you have two cats, or even if you only have one, make a digital recording of the cat meowing, such as when you are driving with them in the car. Save it somewhere on your computer and use it, should one of them ever get out and go missing.

I hope this helps you find your missing pet in the same way it helped me find mine!!