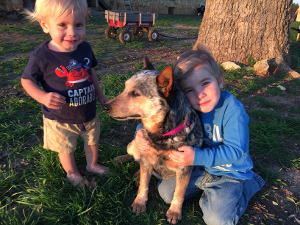 ‘Mrs. Hamilton, this is Katie with PetLink. We’ve found your lost dog, Shelby.’ ‘Really?! I’m on my way! Thank you so much!’ The sun shining through the blinds pierced my eyes as my heart sank with disappointment. This isn’t the first time I’ve dreamed about getting our Shelby back since we lost her three years ago. That was when our family took a trip for the weekend and, after checking into our hotel, we returned to our truck to find our miniature Blue Heeler missing. The windows were down just enough on that cool Easter evening for someone to grab her and run. We drove around for an hour hoping to catch a glimpse of Shelby but she was gone. I spent all night posting ads to craigslist and every local lost and found pets group I could find. Most importantly, I reported her missing to PetLink. On Monday morning I called every single animal shelter and rescue in the area, emailed them pictures and descriptions, and subscribed to all their email lists. I returned to the place she was lost a few days later and put out posters. I felt confident that it wouldn’t take long before somebody recognized her from one of my ads, posts or flyers. This step made me even more confident that she would be scanned soon and returned to us.

Over the next several weeks I obsessed over finding Shelby. I stalked websites and Facebook pages, and spent hours every day answering ‘found dog’ ads. Anytime I drove through the city where we lost her I took an extra hour to drive the streets and ask people if they recognized her poster. I came across the statistics of finding a lost dog, and my hope faded a little. I read story after story of people finally discovering their pet was run over or euthanized in a shelter before they could find them. But I was still determined to find Shelby and be that miraculous story, so I didn’t give up. My husband came in from work one day and begged me to stop. ‘Dacie, she’s gone, you can’t keep doing this.’ I didn’t want him to be right, I wanted to defy the odds, to find Shelby, but I knew he was right. It wasn’t fair to Eli to spend all my time on a computer. I had a little boy who needed all of me back, and so I gave up the fight. I still checked the sites and groups on a weekly basis, but as more and more time passed by we lost hope. Eventually my searches became monthly, then just occasionally.

I wished I had put my phone on silent as it blew up in my purse. Little did I know, those messages held another miracle for us on that special leap year day. ‘They found Shelby! I’m on the phone waiting to talk to them, I’ll call you again in a minute.’ I read the message three times, unsure I understood what my husband meant. Then I noticed a new email and text message from PetLink. ‘We found your pet Shelby, ID#…. Contact PetLink at 877-738-5465.’ Over the years I’ve heard stories of pets being reunited with their families after several months, or sometimes even a year, and I always had hope that would be our story one day, but I never imagined it would actually happen. After almost three full years that hope was all but gone. Yet here I stood, staring at my phone in disbelief, pinching myself so I would wake up from this dream. Apparently Shelby followed a little boy home one day and his dad took her to the vet to see if she was chipped the next morning. So I made the three and a half hour trek from our home to get our Shelby back, stopping only to buy a thank you card. It was the longest three and a half hours ever. I worried I would get there and Shelby would be gone, the thought of losing her twice sank down deep in my gut.

When I walked through the door this beautiful miniature Blue Heeler dog greeted me. She had filled out and was a slightly darker color, but she looked the same as she did three years ago. I knelt down and called her name and she climbed in my lap, her whole rear end wagging. I was unsure if she remembered me and Eli, who refused to stay with his MeMom and little brother, but I know she recognized her name. I rubbed her and loved on her all the way home, despite how bad she smelled. I bathed her and pulled ticks off for an hour, then finally climbed in bed. Shelby jumped up and found her old spot right next to me, that spot that’s been empty for three years. I thanked the Lord for finally bringing her home, wrapped my arms around her, and tried to fight the sleep that I was so desperate for, scared that if I closed my eyes I would wake up to find this was all just a dream. Tuesday, March 1, 2016, I woke up to a warm wet nose nuzzled against my neck, and a smile spread across my face. This miracle was real, Shelby was real. I knew I was living the very thing I dreamed about more times than I can count. We took Shelby to the vet to get a tick medication, dewormer, and a rabies vaccination. And we microchipped Penny, our little Min-Pin, since now we know microchips really work after!
I talked to the gentleman who had found Shelby later that day when he called asking how Shelby was doing and thanking us for the card. I let him know she was great and that I hoped the money I tucked into the card was worth their time and effort, assuring him that getting Shelby back was worth a hundred times that, but that’s all we could manage. He thanked me for it and said they’re going to use that money to adopt another dog. As if this story couldn’t get any better! As I sit here on the couch writing this, Shelby’s head in my lap, I’m reflecting on some of the invaluable choices we make in life. This miraculous moment is all because of a tiny $45 microchip. Forty-five dollars. That’s a week’s worth of Starbucks. One night of eating out. Less than a monthly internet or satellite TV bill. If you have a pet that isn’t chipped I promise you it’s worth every penny. We can’t predict when our furry friends will go missing, and even the most responsible pet owner can lose their pet. Without a chip you are depending on flyers and ads and luck, and if they’re stolen you can pretty much kiss your chances of being reunited goodbye. If it wasn’t for the PetLink microchip and the steady monitoring we never would have got Shelby back!! She finally landed in honest hands that took her to be scanned! One day if your pet is chipped and goes missing they might end up in honest hands, and therefore be returned to your hands through the magic of the microchip. I know one thing for sure – it was the best $45 I’ve ever spent.