Together Again: Separated By Crisis, Reunited By PetLink 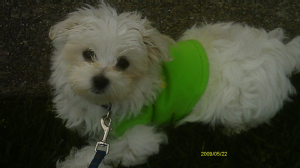 I have an interesting story, though words cannot express how grateful I am for the PetLink service. Without your help and his microchip, my dog, Fitzy, might have been lost to me forever.

I live in Northern California and, several weeks ago, we had more rain over three days than we usually have in a season. Lots of automobile accidents occurred. Unfortunately, I was in one of these accidents and my beloved pup was in the car with me. What happened was this – the weather had briefly cleared up so I decided a road trip to Napa was necessary for my business as well as a good opportunity to get Fitz out of the house after all the rain.

We spent an idyllic, sunny day shopping and having a picnic at a park – Napa is a very dog-friendly city. On our way back home, it started to rain. It was getting dark, rush-hour traffic meant more cars were on the road and, before I knew what had happened, I was on the side of the road with my car smashed and horrible pains in my chest and lower back. Highway patrol came to the scene along with an ambulance. Since Fitz is not a service animal, he was unable to accompany me to the hospital.

Despite having a broken back, as I later learned, I initially refused the ambulance, as concern for my dog’s safety and well-being meant I wanted to stay with him. I was assured that Fitz would be taken to Animal Control and would be safe and in good hands. It was only due to the reassurance that someone could pick him up that I allowed myself to be separated from my beloved boy.

By the time I was poked and prodded and given every kind of test possible in the hospital ER, it was past midnight and I knew Fitz was going to have to endure the night at Animal Control. My tears were not for my broken back but for him, worried he would be scared and alone, or with strangers or in a cage with big mean dogs.

My Maltese, Fitzwilliam, came into my life when he was an eight-week-old, 3 lb, white cotton ball and, quite possibly, the cutest thing I have ever seen. I was going through a divorce and he was my Valentine’s Day gift to myself. Fitz was my dream dog, and is named after a romantic literary hero, Mr. Fitzwilliam Darcy – Mr. Darcy – of Jane Austen’s classic novel Pride and Prejudice. Mr. Darcy is the perfect gentleman and my dog, Fitz, tries his very best to be the perfect little man for me.

As I was to later discover, I had very legitimate reason to be concerned about what happened to Fitz while I was in hospital. Fitz was dropped off at Animal Control without any identification. He hates collars and harnesses, so I allow him to be naked unless we are out on a walk. His collar and leash were in the car but the police officer took him as he was to the shelter. The events that followed are unclear but, for whatever reason, Fitz was taken into Animal Control with zero owner identification. It is only because of his microchip and PetLink’s help that he has made it back to me safe and sound.

The morning following his admission, a very kind woman, and fellow Maltese owner, came into work at Animal Control. She noticed Fitz right away, how well cared for he was, and what a sweet disposition he has. She checked his paperwork on file but, unfortunately, my name was nowhere to be found. Fitz was then checked for a microchip.

Lo and behold, my PetLink information popped up! Thanks to your reminder emails, I had recently updated my web profile with my new address, phone number and emergency contact. My phone went straight to voicemail so my PetLink secondary contact was called – my mother. Thanks to PetLink, my mom was able to find out that, not only was Fitzwilliam in need of help, but that something must have happened to her daughter. I had been in no condition to call anyone at that point, so no one even knew I was in the hospital and that Fitz needed to be taken home.

Thankfully, all of my fears for Fitz were alleviated because of PetLink. PetLink was instrumental in locating and rescuing my dog. I am so grateful I took the time to provide the utmost care for my precious baby by getting him microchipped and registering his information online. I was able to keep the information up to date, thanks to PetLink’s periodic emails. I hate to think what might have happened to Fitz if it wasn’t for PetLink. Likewise, my mom was able to learn of my accident and come to my side thanks to PetLink’s emergency contact data.

After getting out of the hospital and checking emails, I saw all of the messages from PetLink referring to Fitz’s missing status. Had I just been at work or running errands, I would have known immediately that something had happened to him. What a wonderful reassurance knowing he is in good hands, even in less fortunate situations. I cannot thank PetLink enough for its role in caring for my dog’s well-being. I have such a peace of mind knowing that the microchip actually works. I will tell every dog owner I know to use PetLink after my amazing experience.

Fitz and I were happily reunited after two nights apart. He hasn’t left my side since. But, realistically, when the time comes that I do need to leave him home or with family, I will have complete confidence that he is safe, no matter what. Thank you again for rescuing my child. I will be eternally grateful.