Together Again: Shy-Ann’s A Hero 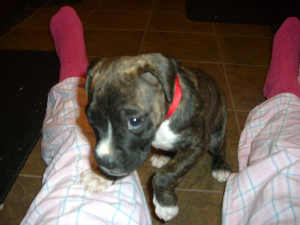 Me and Shy, we used to live three miles from my parents and would jog between their home and ours. Then, we moved to a new place that didn’t accept dogs, so Shy-Ann stayed with my parents for a month, hanging out with their dogs Baxter and Bella, all three from the same litter.

Playing out in the back yard with her brother and sister, Shy, I guess jumped the fence with Bella and together they must have started heading for my old house. Shy-Ann was trying to head home, trying to find me and, though I think she knew where she was going, she and Bella got lost in the desert. There were no houses or lakes, the place is full of coyotes. The dogs were missing five days with no food and no water.

On the Saturday morning, five days after Shy-Ann and her sister came up missing, I received a call around 9 a.m. from a man named Clint. He called me in a panic. He had been riding his bicycle when a dog began trying to catch his attention and led him to an area by a canal on the back side of Vistancia, AZ. He said the dog, who was Shy-Ann, seemed to be in OK shape but was very dehydrated. He said Shy was trying to lead him to something. Naturally, he assumed it was her owner.

So, he called the number on her PetLink tag and texted it as well to see if her owner was in trouble. PetLink connected Clint to me and, when I finally answered, he asked if Shy had gone out alone. I told her no, she was with her sister, Bella, and they had been missing for five days. Clint followed Shy as she led him to Bella. He described how, as they went, she would run ahead, then stop, to see if he was still following her.

Bella was stuck under a fence by the canal, foaming at he mouth from dehydration and had cactus stuck all over her face and body! Bella’s PetLink tags had been ripped off during the adventure. She was stuck and couldn’t move. Clint got Bella untangled and had to carry her all the way back to the road, where he waited for my mom to pick the dogs up and take them to the animal hospital! If it weren’t for Shy-Ann, the man said he didn’t think Bella would have lived much longer. They are now both fine and home safe.