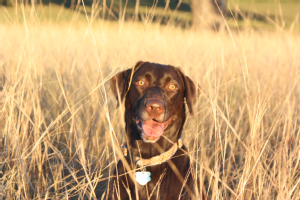 My wife and I are expecting our first child in January. She’s had a very difficult pregnancy and one morning she was experiencing some complications and the doctor wanted us to come to the hospital immediately. We were very worried because the baby was still several weeks early. In the confusion and panic of that morning, the garage door was accidently opened while our five-year-old chocolate Lab, Mousse, was eating her breakfast in the mudroom, which is attached.

Mousse, who normally NEVER leaves the yard and ALWAYS has her tags on, went on a little morning adventure through the neighborhood, next to a busy street. Earlier in the week, her rabies and ID tags had come off her collar and were sitting on the coffee table for us to replace. A very kind neighbor, Mike K., found the wandering Mousse on his way to work. He lovingly dropped her off at a local vet. We had emailed our Neighborhood Watch, called friends to drive the neighborhood, and called our vet to ask them what to do. We got Mousse microchipped years and years ago. Now, this was the first time that we’d ever had a need for it, so we honestly didn’t know if it would even work.

Meanwhile, my hysterical wife and I were walking into the hospital when I received an email that Mousse had been scanned at the local vet and it even included the vet’s information! I truly can’t explain how thankful we are that we used PetLink. The time that elapsed between Mousse being lost, found, dropped off and scanned was only an hour but it felt like weeks. We were able to call the vet immediately and picked her up later that afternoon, once we found out that my wife and baby were okay. In the rush of the day, I didn’t respond to the email that Mousse had been found and I even received a phone call from PetLink to ensure that I knew where our dog was. We can’t speak highly enough for how perfectly PetLink worked for us!
On a scale of one to ten, PetLink is a ten.