Together Again: A Strong-Willed Cairn Terrier Beats The Odds 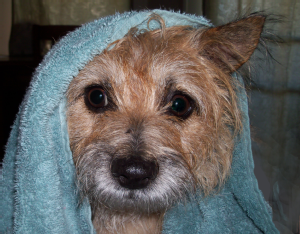 Anyone who has owned a Cairn Terrier – the dog like Toto in The Wizard of Oz – is likely to agree with me that Cairns are happy, hyper, sturdy and amongst the greatest escape artists you’ll ever come across. Once my little Cairn, Nakita, climbed a tree in my back yard by pushing the fence against her back to climb vertically. When she did that, I was combing the neighborhood until 3:00 a.m. looking for her and she was eventually found standing frozen and terrified on a branch up high.

Nakita has always been a house dog but prefers being outside where the action is and this has led to several scrapes. Years ago, it was suggested that I microchip my dogs. It had already become much more affordable, but I felt it was a waste of money since the dogs always had their collars and tags on. Still, I thought, it never hurts to have a little extra insurance and soon it was done. Less than a year later, Nakita was testing the wooden slats of the fence and squeezed through a loose one. The neighbor’s very large, vicious dog grabbed her by the neck and began biting and ripping her neck and back. Nakita made a miraculous escape minus her collar and fled back home. After that day she altered her escape route. Now Nakita is 13 years old and needs help going up the stairs but she still manages a little adventure more often than I would like.

For example, this summer, a neighbor accidentally let my dogs out at 11:00 p.m. I had forgotten to put Nakita’s collar back on after shaving her as I do every incredibly hot summer. The other two dogs were caught at 11:10 p.m. with tags and my vet was phoned the next morning. In the meantime, Nakita who is closest to me and who always comes back within half an hour at the most, had disappeared…

Two days later a man and his young daughter saw Nakita wandering down the middle of the street not far from the highway in what he said was heavy traffic. She looked like she was going to pass out. She had walked all the way across the city in over 100-degree heat. This Good Samaritan took Nakita to a vet and had her scanned. PetLink was notified and I was immediately sent an email. The process was slowed because my Internet service was down and because, in spite of promptings by PetLink, I had not updated my contact info after my phone number changed.

I called PetLink after seeing the email and a very empathetic woman dialed the pet clinic for me. I was able to call the rescuer to talk about recovering Nakita but he told me he had bad news. The man had brought Nakita home for safekeeping and his family had fallen in love with her. The next morning, he had put my little Houdini in the back yard for a short while. He went on to explain over the phone how she had escaped and stated, ‘I have never seen anything like it.’ A wave of depression hit me. Clearly, Nakita was trying to come home to me, but the odds were not in her favor…

I left work and checked email. Another message from PetLink had appeared reading ‘Nakita has been found.’ As I checked the time that the email had been sent, I hoped it was not just another automated re-send of the message that had led me to the rescuer and the bad news that followed. I am not someone prone to emotional hysterics, but my hands started to shake so badly that I had trouble dialing the PetLink number. This time, the news was mostly good. PetLink explained in detail where Nakita had been found and which pet clinic was currently caring for her, as well as information about her physical condition. Someone had found her walking near where two highways meet and she was being treated for severe dehydration.

Nakita is home. She keeps staring at her water bowl, taking drinks every few minutes. She is exhausted, but the sparkle came back into her eyes within a day. You don’t realize just how much you love your pets until you lose them. Thank you, PetLink, you brought my best friend home safely.