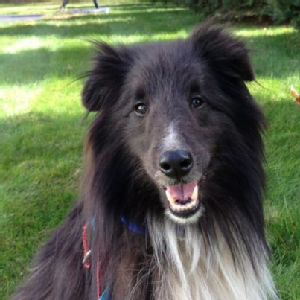 I wanted to let you know that our dog, Cosmo Grant, has been reunited with us due to the help of many wonderful people with very large hearts. If we hadn’t microchipped our dog when he was a puppy we would not have our beloved Sheltie back home with us. Cosmo didn’t like collars so when he was lost he was without any identification except the microchip. We are so very thankful this is an option for our beloved pets.

Cosmo went missing in May. He was gone almost five months to the day. He doesn’t get out a lot – he doesn’t have a reason to leave. We had a new fence and were gone an hour, having made provisions so he wouldn’t jump out. We have chickens as well in another section and now we’re thinking he may have run after them and then couldn’t find his way back home.
Cosmo’s not fond of wearing a collar and the only way of indentifying him is through the chip he got by chance at the vet where we took him as a puppy. Once he was gone, periodically, other children would tell my kids they’d seen Cosmo and we’d drive around neighborhoods.

We learned that Cosmo had been in a particular area almost two months and we were getting concerned because it was getting colder. A man who had been feeding Cosmo from a distance reported there was a very shy dog around and he would leave food out for him every night.

I made a call to the Collie Rescue League and spoke to a woman at the dog recovery service who sent a food trap and camera to capture Cosmo. “Don’t be surprised if it takes 10-12 days,” she told me, “He might be leary of going into a cage.” Happily, within 36 hours, the trap caught Cosmo and, in the meantime, it also caught two cats.

I had a good feeling and was telling the kids, “I think Cosmo’s coming home.” We said to ourselves, “Cosmo’s coming home, so let’s just get one dog. Cosmo’s good with other dogs and he needs a playmate before summer’s over. Let’s get a puppy.”
Yes, that’s right, we got a new puppy born around the time Cosmo left. We got him about three months later. So, as well as Cosmo, we now have a five-month-old puppy to play with Cosmo and we plan on getting him microchipped as well next week when we neuter him. They get along really well, they’re good friends and Cosmo hasn’t changed, he’s still a healthy, happy Sheltie.