Together Again: Our Little Adventurist! 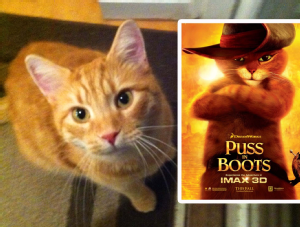 Where to begin… Well, I wasn’t looking to get another kitty after having to put down my three-year-old cat after a tragic accident, but a friend of mine insisted that I look at the kittens at her Mom’s friends’ ranch. So, one day, we drove down and I really wasn’t feeling any connection with the ‘itty bitty’ kittens, or just wasn’t sure if I was ready still. Then the owner said there was a pair of orange tabby siblings (a little older) that lived under the porch, making the sand box their own litter box already! So … we walked over and I saw one’s little face peek out over the porch, it was instant love!! He came right up to us and I knew he was the one. I was bringing home a new kitty and so excited. We have two large yellow labs and I was a bit nervous at first but they all got along instantly as well. We were one big happy family!! I picked the name Roma from the pizza restaurant that my boyfriend and I spent so much time at during college. It was the perfect name for this little furry orange tabby! So a couple of years had passed, and Roma was living the life. He got to roam outside with his best buds, our dogs, even our friend’s dogs! They even played fetch together and he went on walks with us without a leash. Seriously the perfect cat and oh what a cuddler! Unfortunately, one day Roma fell sick after being adventurous so I took him into the vet. He was extremely dehydrated but otherwise still pretty healthy. When I brought him home I didn’t want to let him out for a few days. Being sick I knew he would struggle if the coyotes in our neighborhood got to him. Well, one day he ran out with the dogs. I thought he’d be back at dinner, but he never returned. I made posters, walked the dogs around calling for him for countless nights … still, no Roma. Posters went up and I went to every shelter/clinic within 10 miles. Nothing! Time had passed… I thought the coyotes had got him for sure, but my boyfriend still believed he was alive. Just recently he was looking to actually get me another cat. Well, here I am just showering and getting ready for work when I get a voicemail from a shelter that was 25 miles away, they had him!!! WHAT?! I honestly could NOT believe it!! Shedding tears of joy while calling to claim him, oh what a miracle! The shelter said they had him for about six weeks and never found his chip when scanned the first time he came in. So he was up for adoption and there were a few families interested in him. The collar they gave him had fallen off so they scanned him again to check for his info, and I popped up in the system!! They called me at 4:20pm, which is VERY ironic, because Roma’s birthday is April 20th, unbelievable!! We picked him up from the shelter and he knew exactly who we were, recognized the dogs and our home right away. It’s like he never left, he is still the same Roma!! But it’s been 18 months since we last had him… So, the biggest question is “Where have you been, Mr. Roma?” The shelter only had him for only six weeks out of his last 18 months away from home. We believe, since he is such a WONDER CAT (even fights off foxes in our neighborhood), and survived all this time, that he may have just been away featured in a little film by DreamWorks… you may have heard of it…”Puss in Boots”! Ha ha!!! I guess we’ll never know what this little adventurist was up to! I’m still in awe, can’t believe it! It was perfect timing, just before Thanksgiving. I think everyone I knew that I had shared the news with shared it with their families during such a grateful time of thanks! We are so blessed to have Roma home and it’s all because of his little microchip and LOTS of LUCK & LOVE!!!!! Thank you!