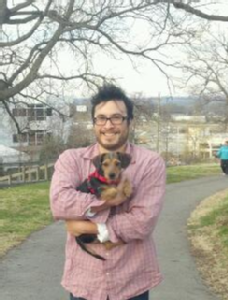 I’d gone swimming with friends out in the country on a hot, spring day. My Dachshund, Stewart, got off of his leash and I thought to myself, “If I need to put him back on, I will, but we’re out in the countryside, nice and peaceful …” Then, I saw him darting into the bushes and next thing he was gone. I stayed three hours looking and calling for Stewart but he never came. I had traveled with some friends and now they had to go. I looked until it got dark and then some strangers gave me a ride into town.

As I reached home I was very stressed thinking, “I can’t go home without Stewart.” So, the next day I went back out there and waded up the river and up a creek for an hour and a half, but there was still no sign of him. My mother came over, we made flyers and we went out together to look for Stewart. Literally, just as we were giving up hope on that second day, leaving the search and deciding to stop looking for him, the phone rings. We had just got in the car so we pulled up on the highway to answer the call. It’s PetLink telling me my pet has been scanned and identified and is checked in to a medical facility. Then I got a second call and it’s the vet’s office saying, “We’ve got Stewart.” At first, I thought, “Oh, no! He’s at the vet’s. What happened? Is he OK?” but they told me, “No, he’s fine.”

The man who picked Stewart up left a business card so I could contact and thank him. It turns out that he’d seen Stewart at 8 p.m. jumping out of the bushes in front of a speeding truck that almost hit him. The man pulled over, Stewart got in his car, rode to his house and after offering him water, good food and rest, the man took him to the vet to be identified. I went to get Stewart and, for five seconds, he stared at me, like he didn’t recognize me … then he was wagging his tail frantically, saying “I know you!” PetLink did a great job reuniting me with my dog.