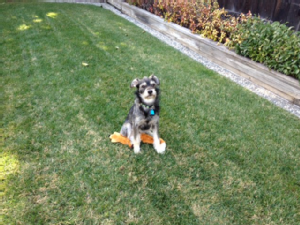 It was my second day back to work after having almost five full days at home with McMurphy, my one-year-old Border Terrier/Schnauzer mix. Here he is in the picture coveting his toy. After making sure my home was dog-proofed, I adopted McMurphy from the Fremont Animal Shelter in California. Then, when I felt we had bonded, I returned to work leaving him in my back yard to play during the day.

It was noon when my neighbor texted letting me know that when she went to check on him, he was gone! Her family checked my house and all around the yard but couldn’t locate him. I was devastated, because I feared he was unfamiliar with the neighborhood and wouldn’t be able to find his way home again. I frantically cleared my schedule, so that I could immediately head for home. Just then, I received another text from animal control letting me know that McMurphy had been picked up! This must have been done by a hand-held scanner, because my neighbors, who were on foot looking for McMurphy, found animal control’s truck just down the street and ran into the officer.

I was very impressed that the officer wouldn’t release McMurphy without my verbal permission. As soon as he received it, McMurphy was handed over to my very concerned neighbors who took care of him until I got home. They safely returned him to the back yard and we were reunited that afternoon! I checked my fence and couldn’t find any escape routes, so I’m thinking the meter maid must not have secured my gate properly.

I feel forever indebted to the lovely people involved. McMurphy is now home again. I’ve since hired a sitter to check in and play with him a few times a day until I return from work. Thank you, PetLink, for such wonderful service.